Flashback to May 12, 1991. Sioux Falls, South Dakota. McKennan Hospital. It’s my mom’s 25th birthday, and it’s Mother’s Day. It will also become my birthday via Cesarean section. Pretty special. Or as my story would come to unfold, pretty full of heartache.

The role my mom has played in my life has been both amazing and largely invisible. She is a beautiful and passionate woman with a brilliant imagination and a tender heart. But she is also someone who struggles to find stability and grounding, which doesn’t make a great quality in a parent.

Long story short, after my parents’ divorce, my sisters and I lived like ping-pong balls with our little purple suitcase for about five years. We counted more than thirty places to call “home”- sometimes for a night, sometimes for a weekend, sometimes for a few months, but always a lot of time in the car to get to school.

I know my mom has big dreams. She looks at the world through a lens of confidence, courage, possibility and creativity. She really believes these dreams are attainable. It’s a part of her lifelong battle with borderline personality disorder. And this is where I wonder if that is my story to tell or not.

As a 7th grader, I was only allowed to see my mom through supervised visitations with a court-appointed child advocate. By 9th grade, a judge ruled to grant my dad and step-mom full custody and my mom would eventually move to New York. I can count on one hand the number of times I have seen her since. Childhood trauma was real for me.

That’s the part where our stories blend together. We share a birthday- a beginning. It always falls on the week or weekend of Mother’s Day- an anniversary. It’s like having a wound reopened on an annual basis, even if the grieving process looks a bit different each year.

Dr. Pauline Boss, a former professor from the University of Minnesota, coined the term “ambiguous loss” which is different from ordinary loss because there is no verification of what really happened or no guarantee that a person will return at all or return to the way they used to be. It’s used for circumstances where you have to grieve someone who is still alive or missing.

One poet who has been tremendously insightful into my journey of processing this ambiguous loss is Nayyirah Waheed. If you have never heard of her, I recommend her books Nejma and Salt without reservation. Here are just a few of the poems that have settled on my heart and given me peace despite unresolve. 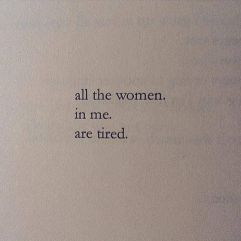 I won’t deny that becoming pregnant with Zadie and getting to be her mom has helped me tremendously in reclaiming a weekend usually filled with triggers and heartache. Becoming a mother has been a wild ride, but also an urgent call to ensure I can find grounding and stability for my daughter to break the cycle that is most familiar to me. I have worked really hard to become the person I wish I had in my life when I was a child and to nurture the wounded little girl that still lives in my heart.

I have been really honored by some friends who have confided in me their journey to become mothers and the hardships that have arisen along the way. Sometimes painful things are done to women’s bodies to nurture them to do what we assume they were made to do- bring life into the world. And so I grieve with my friends who will be amazing mothers one day and are battling infertility. I never imagined miscarriage would happen to me, but it is a real wound for many women.

And then there are women who have lost amazing mothers- maybe too soon or maybe after a long and beautiful life, but they are still sorely missed. Mothers have that power in life and in death. It was our first home, and that sense of belonging is hard to break.

I am intentionally trying to embody the verse in Romans that asks us to “rejoice with those who rejoice and mourn with those who mourn.” I am hoping to be conscious in conversation with absolutely everyone of what they might be needing at the time, and to meet them where they are at. I think that’s what we ultimately love about mothers- the empathy, the hope, the sense that someone wants to live your life with you.

I believe God spoke this verse over my life on Mother’s Day 2013, which was also my 22nd birthday. I heard this: “I will not cause pain without allowing something new to be born” (Isaiah 66:9). Maybe I’m taking it way out of context, but I don’t really care. It gave me permission to name my pain and to open myself up to the amazing things God wants to see done in my life.

So this weekend, when churches and families and stores celebrate mothers, and when it hurts like hell for some of us, remember this: